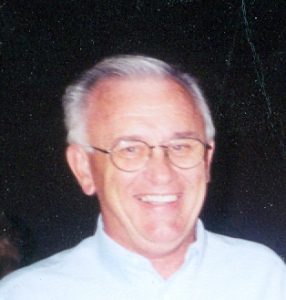 He met Cheryl Pralle in seventh grade. They dated for seven years before being married at Emmanuel Lutheran Church in Rock Rapids, Iowa on Dec. 22, 1967 while Lynn was on leave from the Navy. They then moved to Hawaii and then San Diego and Villejo, Calif. Lynn was honorably discharged in November of 1969 before returning to the Sioux Falls area.

They made their home in Harrisburg in the fall of 1975. They welcomed their first daughter Andrea and 20 months later, Kim. Their family is charter members of Shalom Lutheran Church in Harrisburg. During Lynn’s time in sales, he worked for Graham Tire, Mahlanders, Dakota Millwork, H and H Lighting and Menards. Lynn was a member of SF Jaycee’s, Sioux Falls Home Builders Assoc., Harrisburg American Legion, Tiger Booster Club, Sioux Falls VFW and the U.S Submarine Veterans Holland Club- Scorpion SS278 Base. He was also a member of Al-Anon.

Lynn enjoyed being part of many yearly rituals, like the Harrisburg Homecoming Parade and taking his grandchildren to the circus every year. Halloween was a big holiday at their Harrisburg home as was Easter with Easter egg hunts and more. He followed Harrisburg sports until his grandchildren became involved in sports. He then retired his maroon and gold for orange and black and became a Lennox Oriole supporter. He could be found at all of his grandchildren’s events. Grandson Dallas and Lynn enjoyed many Augustana basketball games. He enjoyed yard work and taking care of the many squirrels and birds that visited them.

Lynn and Cheryl enjoyed travelling to Submarine Veterans conventions around the US. He enjoyed sharing stories with old shipmates. While Lynn was in the Navy he picked up an incense burner oversees and then decided this would be something he should collect. They enjoyed road trips and antique shopping over the years looking for these incense burners.

Lynn was truly in his element when he was with his children and grandchildren. They were his pride and joy. He was very proud of each and every one of them.

Lynn was preceded in death by parents and father-in-law.

5 condolences have been left